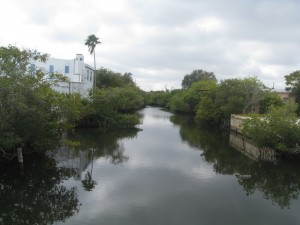 Taking the corner like an Indy 500 racer, Cathy whipped into the makeshift parking spot and jumped out of her car, already apologizing. We had been waiting on her to arrive, our very own Clam Bayou tour guide. Introductions were said. Life vests were put on. Cathy quickly unhooked her single passenger kayak from the roof of her small car and slipped it into the mouth of the inlet. On our tour she took us around the hidden trails of Clam Bayou and brought us to an area where the city had dammed up part of the water so that it wouldn’t affect the traffic on — what I am pretty sure is — 22 Avenue South.

Weaving in and out of the legs of the mangroves, Cathy had her camera close by and would take snapshots of the scenery. Between shots of the ibis and the bayou she told us a story of how she always hoped to see a dead body along the water.

A dead body is not something I would want to find paddling through the swamp on a Friday afternoon. But Cathy explained that if a cadaver were found, people would start to take notice.

This area is a lot like Cathy, a little rough around the edges, intimidating, and even a bit wild. Both these waters and Cathy have a purpose: to bring attention back to this body of water. Hope for the wilderness has not been completely lost, even though some may only see it as a garbage pit, trash on the banks at least means there are people actively coming down. The beer bottles and old Styrofoam cups are part of the charm.

At first glance, the waterway does not look like it can be successfully navigated. But look harder. Salt Creek goes from Bayboro Harbor to Clam Bayou. A good portion of the creek can be paddled, depending on the tide. When I had gone through Salt Creek the first time, we loaded into our canoes at Bayboro Harbor, then headed south. We passed Fish Tales; I could smell the fried food and see the people having ice-cold beers on the deck. If only I could have a beer while doing this, clearly I would have to come back and canoe Salt Creek again, but next time with proper provisions.

Along the side are a fishermen bringing in their daily catch. The banks have lush mangroves, with beer cans for decoration. Some lucky groves have old grocery bags tangled in the hair of their branches. Paddling on, the fishermen and marinas fade; it’s just the creek and her used accessories.

The further one goes, the harder it becomes to continue. The branches are too thick to get across, and cutting down the mangroves are not always part of the option.

If this creek were in a different part of town, there would have been a board meeting by now: people bringing the creeks “issues” to light, the creek is unsafe for their children to play around or, the degradation decreasing property value … the mangroves growing too wild, I can’t see the water from my back yard.

But south St. Pete is associated with a lower economic class, and meetings like this are not as common as in a typically white, upper middle class neighborhood. Imagine the same exact creek just moved up a bit. Economic standings and perceived notions of respect on nature, directly affect the cleanup of Salt Creek.

Moving the creek is not going to happen, so how can we get the motivation and awareness to help clean it up?

Or is this dingy creek fine the way it is?

There is no doubt that Salt Creek has its own charm about it. I think part of that charm is the influence that south St. Pete has imposed on it. If this creek were in a wealthier neighborhood it would more than likely become just another cookie cutter canoe trail. There would be no adventure in going through the waterways. As it stands, the creek has its own voice, from the many characters that ride their makeshift boats down it, to the socioeconomic graph left by beer cans.

Landscape designer Ann Whiston Spirn might agree with me. It’s about the water and keeping it protected, without changing it all together. As she writes in her essay “Restoring Mill Creek: Landscape Literacy, Environmental Justice and City Planning and Design: “To read landscape is also to anticipate the possible, to envision, choose and shape the future: to see, for example, the connections between buried, sewered stream, vacant land and polluted river, and to imagine rebuilding a community while purifying its water.”

The community has been built around Salt Creek. Raise awareness in the community and that will have a direct effect on the waterway. There is no need for large clean up crews and state legislators to come in and try to set projects into motion. Let the community take care of the creek. People had originally set up homes around it so they could use it as a source to get food, now I don’t think anyone would really eat out of Salt Creek. But that same thought, that same notion of wanting to live from the water needs to take place.

If finding a dead body in this waterway is what it is going to take to get Salt Creek on the map, I’m not sure I want Cathy to ever find one. Let’s keep Salt Creek for ourselves. Keep Salt Creek for the community. The people who enjoy it now for how it is, there are no reasons to change the way it looks. Cut back the mangroves, give it a trim. No. Pick up the trash sparking in the water, like sea wreckage. Yes. That we can do. We need to leave this water system the way it is intended to be experienced. Embrace Salt Creek for everything that it is, and everything that it isn’t. I don’t want a big dredge coming through pulling back the mangroves, and making enough room so that a small-motorized boat could get through. There is no fun, no adventure in that creek. Leave me with the creek that is there now. The creek that, if I fell into the water I might want to get a tetanus shot.