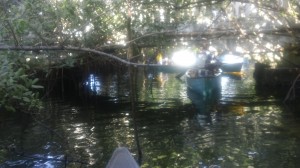 Four brave souls. They sauntered toward the water in pulsating daylight, wielding machetes, loppers, clippers, and a will to bring the thunder and leave their mark. They raised no eyebrows while brandishing sharp objects, walking across a modern college campus. The professor, who was in this gaggle of kindred spirits, raised no eyebrows either, even though a mentally-frazzled grad student he had just told to rewrite a paper was in this group that he was about to traverse to a secluded area with, sharp tools in tow. The faithful leader had nothing to fear though; these students were still blissfully reeling from a recent overnight class sailing trip, thus, the related kinship still saturated their collective-conscious.

The campus, an aesthetically-pleasing enclave nicknamed “The Jewel By The Bay,” had a beautiful landscape. Truth be told, however, the “Jewel” was somewhat of a cubic zirconium — natural wonders destroyed in order to install man’s landscaped version of  “natural beauty,” a campus landscaped almost exclusively with non-native plants.  Not to be outdone by the destructive irony that occurred in the building of their revered campus, these four brave gentleman were on a destructive quest to chop, cut, and hack a pathway through a forgotten waterway known as Salt Creek. One would think that an element of nature being forgotten would allow that element to remain in its pristine state. In reference to Salt Creek though, the forgotten nature, the nature in question, left it a neglected soup of litter, a haven for dilapidated boats that could potentially function as meth labs — something that had happened before on Salt Creek. This was a Nature Writing class, so all involved did not beat around the bush when it came to beating a path through bush. The four “Modern Magellans of Tampa Bay” paddled school-issued canoes through the mouth of the creek and went under “Thrill Hill,” a bridge aptly nicknamed by bird-loving motorists who wanted to channel their inner osprey and experience the gift of flight by crossing the hump of the bridge with such excessive speed that they temporarily soared.

After slinking their way through the creek, the four approached some travel-impeding foliage, and began to cut a pathway conducive to canoeing. Some foliage was chopped methodically, but other foliage was chopped vindictively, such as Brazilian Pepper, an invasive species in Florida, even when it isn’t blocking aquatic thoroughfares. They braced their canoes as best they could, and haphazardly unleashed a flotilla of fury on everything that blocked their egress, although they had agreed on a policy of only chopping down what was necessary to free-up areas that had been blocked. This mission was an instance of “urbaniture” where man made a compromise with nature, the implicit agreement being that these men would only destroy the plants to a degree that would make the creek navigable, thus, absent of situations requiring a generous slathering of Neosporin, even though said remedy was easily-obtainable at the new Dollar General, a mere hacksaw’s throw from the creek. They were only trying to clear a pathway, not attempting to establish dominance over nature. This was maintenance to allow functionality, not maintenance to end all future maintenance, which was somewhat considerate of nature, and fed into man’s desire to never do more work than necessary.

As they continued to clear what was blocking their path, another human approached. This particular gentleman had been fishing not too far up the creek. He sidled-up to the makeshift trailblazer crew and saw them working diligently, yet still cautiously enough not to capsize. He exclaimed “Hey! I don’t know if ya’ll are supposed to be cutting that!” One of the members of the group mumbled to his cohort “Well, how about you come back when you know for sure … douchelord?” After that, the protector of the nuisance foliage took in the scene for about twenty-six awkward seconds, then departed from whence he came. Of course, being advocates for nature themselves, the four men understood that the gentleman’s intent was to ensure that no destructive activities occurred on the creek. On the other hand though, if he wanted to protect the creek, perhaps cleaning-up some of the copious amounts of litter in and around the creek would have been more productive, especially considering that the litter pollutes the water that he catches fish out of  presumably for consumption.

Fittingly enough, the four gentleman clearing the creek, were doing so with plans of returning to clean-up this exact litter. One thing about the nature of man, is that his desire to act as an authority often overlooks practicality and what is in his best interests. In this case, the scolder in question neglects to do creek improvements which could be directly beneficial by providing cleaner water for the fish that he catches. His version of creek improvement was one where he granted himself the opportunity to exact verbal justice on those he saw as wrongdoers who were actually a motley band of volunteers looking to improve the water that he enjoyed. This underscores man’s need to roost in points-of-intrigue in nature to reset his brain … because the contradictory nature of our thought patterns as social animals often lacks coherence, and left unchecked, our modern ways of thinking can amount to a contradictory and counterproductive shitstorm. The gentleman in question opted-out of using Salt Creek to reset his spirit, in favor of reprimanding others when he didn’t know their intent.

After having to duck in order to slither under a bridge that looked like it was infested with speckled neglect and instant-lockjaw juice, “The Chop Mafia” ended-up at Bartlett Park, a city park in a low-rent neighborhood, where the creek was almost treated as an inconvenience that disallowed the building of more tennis courts. However, there is a dock jutting into the creek and a park bench facing the creek for those who would like to watch the mullet jump and witness the scenic tide of Natty Light cans rolling-in. The four bushwhackers observed the scene and hoped that their work of clearing a pathway for canoe and kayak access, would one day lead the city to frame the creek as more of an asset than a nuisance.

After soaking-up the  awesomeness of the moment and some proverbial self-gladhanding for “accomplishing exactly what they had set-out to do,” The Pickaxe Platoon ventured back through the path they had just cleared and basked in satisfaction. At one point, vehicles were passing on both sides as the foliage on the creek’s shore concealed them from the roadway. People passed by on their daily routines, totally unaware of the creek and the altruistic destruction that had just occurred mere feet from where they traveled. The birds roosting in the trees did not seem baffled by The Pathclear Posse in the least; they almost seemed relieved to no longer have to worry about when humans would discover this rare enclave. They could do what animals are always forced to do, and learn to live with man’s whims, instead of trying to hold onto the elusive “undiscovered untouched.”  This was “The day the foliage died,” but only to a degree that was needed. It was an example of man and nature working clumsily together in compromise, where all parties got at least some consideration. Whether the creek will become pristine through due-diligence and the touch of the right humans, or if it will be left alone to have what’s left of its pristine nature befouled remains to be seen, but on this particular day, Salt Creek got its “hair did” and was treated as the prettiest girl at the dance.