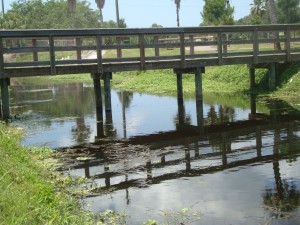 On a sunny day with low-lying clouds racing a regatta in the sky, our team shoved our cumbersome canoes into the water of Lake Maggiore. An urban lake in south St. Petersburg, Lake Maggioreis a living ecosystem in and of itself. After paddling out onto the muddy mass, the team began to expand across to water, in part because of the wind creating surface currents many which ways. Each pair of paddlers pointed out an action of nature that another may have missed. A few immediately took to the birds, listening for calls and winged kites playing in the breeze. My partner noted the rash, industrious sounds from a mulching site just on the other side ofDellHolmesPark, beyond the wild shore lined with pines and palms and tall grasses. It’s that sort of blind faith reaction that can lead one to, say, the sea; you can’t see it, but you can smell it and hear the waves crashing about it. The noises that so annoyed my partner and the smell of fire further up our watery path had less grace, for sure. Something else we noticed was the lack of recreation on a lake in the middle of so many people.

The history of the lake spans prior to the urbanization of the city. Though, it’s human interaction that has shaped the lake in its recent past. The lake seems to have gone to the birds and the invasive sea grasses and water lilies and the urban runoff and the muddy accumulation on its bottom. Human interaction has even interfered with the saltwater creek that connects to the lake, as the creek has been channelized and gaged, disturbing the natural flux. All the while, though,Lake Maggiore still perseveres. Our group still saw leaping pinfish and, from afar, an alligator. Not to mention the various birds who call the area home. The nature of Lake Maggiore refuses to accept the fast-paced, toxic environment outside its perimeter, and I think I doesn’t even pay it mind.