May 2, 2012 / Friends of Salt Creek / Comments Off on Pelicans (Karen Lucibello)

It was an awesome sight to behold. As I was driving home from lunch at Munch’s I stopped, as I often do, on the shore of Lake Maggiore. An unusually large flock of white pelicans were congregating near the dam that separates the lake from Salt Creek. 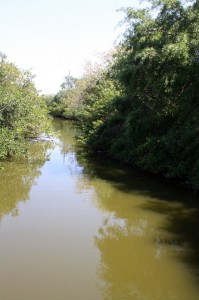 As each member of the flock was satisfied they lifted off from the surface of the lake with a slow pumping flap of their wings. They took off like 747s from the tarmac, first at low altitude and then executing a sharp angular rise to reach cruising altitude. Within a few moments they were all gone like a school yard after the bell.

The lake was left dark and empty; I too left walking slowly back to my car.