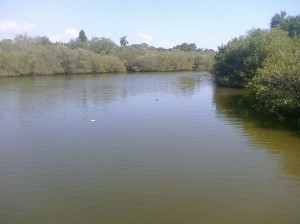 Salt Creek run west to east through lower Pinellas County and south St. Petersburg. The stream’s origins remain to be discovered. Early maps show the headwaters mingling with those of Clam Bayou, which feeds into Gulfport, and the careful scientist may discover Salt Creek’s beginnings near Interstate-275, around 26th Ave. South.

For certain, the creek’s beginnings can be traced behind McCabe United Methodist Church, on 26th Street South. It runs from there into Little Lake Maggiore, to the west of Dell Holmes Park, where it feeds into Lake Maggiore. Inlet streams also feed the lake from Boyd Hill Nature Preserve, which are also fed by streamlets tracing up to St. Petersburg Country Club.

Past Lake Maggiore, the creek channelizes as Martin Luther King, Jr. Street, where it passes through the Harbordale Neighborhood. The creek surfaces from its culvert at Bartlett Pond (at 22nd Avenue South) in Bartlett Park. Now a tidal body, covered almost entirely on both banks by mangroves, the creek runs under 4th Street South then Third Street, where it passes under the local landmark, Thrill Hill. Widening at its mouth, the creek feeds into Bayboro Harbor, which opens into Tampa Bay.