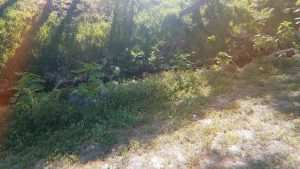 It was two days shy of my twenty-first birthday. Opening day. St. Petersburg was buzzing. Rays and Red Sox fans piled into Ferg’s for the hallowed American tradition of getting plastered on three-dollar beers, then watching grown men hit a tiny leather ball with a stick. Police strolled through the sea of baseball-capped heads bobbing up and down along the asphalt of Central Avenue. “We can’t pour them over here … too many cops.” My friend Hope holds our crumpled brown bag of travel-sized liquor bottles like a secret in her cardigan. “I don’t know,” I say. “Let’s keep walking.”

Sweaty navy and baby blue clad torsos are pushed out of the way as we move through the bar to the stadium. The Trop is ugly, but today, it looks like Mount Sinai. We waited five long months for this day; the thousand-foot walk from Ferg’s to the outfield gate felt like a pilgrimage to Holy Ground. We were ready to scale the mountain up to the nosebleeds to practice our religion. Florida winters are sunny, but they are not nearly as bright as days during baseball season, even if the Trop does not let the warmth in. As we walk through the tunnel under 1st Avenue, the sound of a saxophone playing “Take Me Out to the Ball Game” reverberates off of the sky blue concrete. “Over there looks good. Let’s walk down the hill a little bit.”

Hope pulls the liquid treasures from the bag. The Cokes from Publix were warm already but that didn’t matter; we had found a spot to drink.

From the sidewalk leading from Ferg’s to Tropicana Field, Booker Creek looks like a ditch. The water shoots through the narrow channel down the hill, but you would not know the creek is even there unless you looked. We stood at the bottom of the ravine and were transported into a different world. The sound of the saxophone and the boisterous people above us were a footnote to us in that moment. We stood in the March sunlight, looking at the water, and drinking cheap rum as the clamor of opening day tore away from us. The rum tasted like sunscreen. A world sits beneath the oak trees, in the heart of the city, in the shadow of the great white dome.

How Do You Read a Creek? (Cassidy Towers)