The Social Perception of a Creek (Emily Akers) 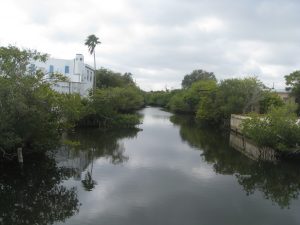 Creeks, just like rivers, streams, and all natural waterways, are inextricably shaped by the social spaces in which they are found. In essence, a creek and a community are one, even if society doesn’t always view it through that lens. Examining the case of Salt Creek shows this relationship clearly. The community of south St. Petersburg, where the creek is found, is highly marginalized, and the state of the watershed mirrors that treatment. Once it feeds far enough away from the upscale harbor and its expensive yachts, the waterway is littered with trash and covered in places with an oily film. But when a city doesn’t care about its citizens, how can it expect its citizens to care about a silly little creek?

Just as important as the physical state is the social perception of the creek itself. Are we calling it a creek? Or are we calling it a ditch? Salt Creek is both creek and ditch, depending on where you’re at. The way in which we label our waterways has a profound impact on how they will be treated, and this idea operates in a cyclical manner. As soon as a creek is labeled a ditch, the community will treat it as such. Consequently, as soon as a creek becomes run down and starts to take on the appearance of a ditch, people will label it in that way. In reality, the parts that are perceived as “ditch” are merely representations of the social climate in which they are geographically located.

Putting the Roses Down (Tori Malizzi)

One Block Over (Katelyn Beane)