Kelley whips past us in her canoe, taunting that she will win the race.

My academic brain demands that I take the sights in, to absorb some sort of inspiration from the clichéd beauty that surrounds me; my natural behavioral tendencies are itching to canoe faster and dominate that purple haired punk by putting her in her proper place: eating my waves as I take the lead. But as I watch her enthusiastic battle with nature, one thought overpowers the rest: I could really go for some cheesecake right now. 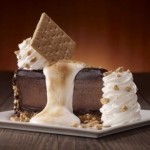 My stomach is competing with the birds overhead for loudest disturbance. Hunger is the ultimate reality and our most intimate connection to nature. In a way, my day dreaming about: an oversized  s’mores cheesecake slice;  melting bits of chocolate ganache helping slide the fork through graham cracker crust; shades of brown on the homemade toasted marshmallow topping adding a hint of cold summer nights around the camp fire….

Fantasies about dessert are interrupted by the sight of a predatory looking bird standing on top of a pile of litter, as if on a throne. I dub him “The Trashy Bird”, a way for me to use language to put his disturbing stare into condescending perspective. The only favorable sensation that I can put into birds’ favor is that they taste awesome with Sriracha.

As fast as Kelley was in beating everyone to our destination, her canoe does not seem to be moving, trapping the rest of our canoeing brigade in the tiny space next to the bridge. She has managed to find an object in the water that interests her enough to stall the race. As she lifts up her paddle, I get a better look at her prize: the surprisingly fresh corpse of a white bird. Our canoeing group looks on unable to move, unable to look away, as she spreads its wings out on the water like a macabre center piece, its beady eyes turned into shining marbles, unseeing. Kelley says: I think dead animals are funny.

I think I just lost my appetite.