Driving up to the a dog park in Asheville, North Carolina, “The French Broad River Park,” I was in a moment of delirium“van lag” of sorts, having changed my environment so fast, still not entirely able to comprehend that I was in a place very different from the flat land of palm trees I had left behind only hours ago. Yet, while in a completely new environment, I couldn’t help but think of the parallels to my home’s humble waterway, Salt Creek — my vision, forever altered with a critical lens from studying it over the last semester. 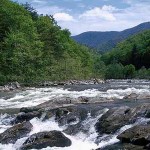 To my right, the river tumbled along, a kayaker on the beast, paddling up stream, making a monthly gym subscription seem like a total joke, and to my left were what looked like a number of old warehouses who shared their ground with silos of equal height and rust build up, the silos surely have seen better days. Now, mostly looking abandoned or just in place for aesthetic purposes rather than something used for actual production. It makes me think back to a time now past. I wondered, what could have once been produced on this river?

After some research I learned that in the 1920s these buildings were once the local cotton mills and leather tanneries but now through the most recent wave of gentrification became a place where the wealthy older weirdos all retire to go on hikes and feel cultured. The mills reflected such progressive artsy revamps to the town, one being covered in a (commissioned, not simply graffiti) spray painted mural and looked like it was converted into a boozy brewery of sorts. This tale of industrialization was similar to that of Salt Creek which was surely just as developed in the 1920s as people started to inhabit the waters as their home. As with Salt Creek, the people who lived on it were typically marginalized groups, and the water way being ignored and unpatrolled lead to an increased amount of crime in the area, including many suffering from a number of hen and frying chicken thieveries.