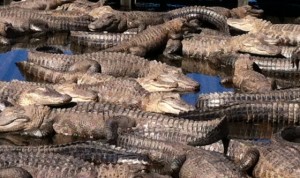 Just like any neighborhood in Anywhere USA, there are tales of strange people, obscure animals and ghost stories that people tell each other on Sunday afternoon BBQ’s or late night around a camp fire.  St. Petersburg is no different.  Sure we have ghost stories. Some of the world’s finest are connected to the Don Cesar or the Vinoy downtown — heck, we even had a monkey that made headlines internationally for his elusive antics.  Now we have another … well let’s just say it been around for awhile however due to the location and the nature of the beast the story is simply chalked up to be “Another Gator” story.

In the area of 11th Street South on Fourth Street, right around Tony’s Meat Market and near the University of South Florida, there lurks a gator.  The stories seemed to have been around for about five to six years … some say more.  About a gator that has been report as being anywhere from 10-14 feet in length and it is said that this big ol’ bull is also missing his front right leg.  Some even say he is missing one eye.  Murmurs around the block say that BoG (Big ol’ Gator) eats dogs and chases children and watches the men as they come to hunt him, only to disappear in a wink of an eye when approached.  Now BoG is the name I have given this guy as everyone only calls him the big ol’ gator.

Sightings of BoG begin years ago, when he was a younger bull male looking for love in all the wrong places and ended up finding a home near Tony’s Meat Market.  He came and went with the seasons and was never hunted or caught by Florida Fish and Wildlife Services

front leg.  He has begun going after pets and people and now the locals are worried, will they or their loved ones be on the menu?

For three years now officials from the Fish and Wildlife Services have been trying to catch BoG but to no avail, he keeps slipping by them.  News stories from Fox News, Tampa Tribune and the St. Petersburg Times have run stories on this beast, pressuring the Florida Fish and Wildlife to issue a lethal force order on BoG last July. But no one can find him.

Many have seen him, some snapped pictures with their cell phones producing blurry images of a “gator” claiming “That’s Him!” Still no one has claimed BoG as dead.

With bridge work going on near the 11th street canal, BoG has not been seen this year…yet.

An alligator will move away from the construction and disruption of his habitat.  To this day if you are near that canal or the Salt Creek people on foot will be quick to tell you: ”Watch out for the gator!”

Not to worry. I will be looking.

.  As the years went on he grew bigger and more aggressive. It wasn’t until recently that residents have noticed his handicap … his missing