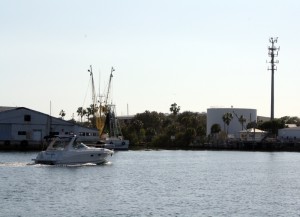 A snake with fins slithered over the oysters—attached to the patches of boulders—along the seawall at Bayboro Hall. The bright red stripe along his back gave away his demeanor: cocky, arrogant, bully. Mullet jumped about above the water; the Red Snapper was on the prowl just below. I yanked my Pinfish toward the middle of the water … I sat quietly, patiently, and anticipated the jerk of the line. I knew it was just about to happen. I was going to catch that monster and be the envy of all in my class. Moments later, my professor summoned us away from our poles. I pleaded for one more minute. I spread my hands a foot and a half apart, showing him the size of my future prize. As he shook his head slowly from side to side, I drug my feet (and my pole) towards him along the seawall. After his lecture to the class and seeing the disappointment resonating on my face as I stared hopelessly back to the water, where my fish had got away, he asked, albeit in somewhat disbelief, if the snapper was really that big. Standing there with nothing but the small bait still swinging from my hook, I nodded that it was … at least in my head.