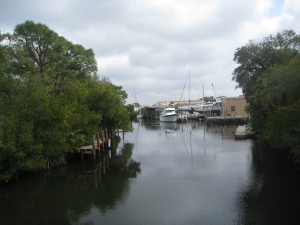 First of all, the yellow life jacket was too small. The cute, young athletic intern had to loosen the straps on the sides, so that it would fit, just in case I fell out of the canoe, which my instructor said was not going to happen. Instructors reminded the rest of the class, all the 20-year-olds, and the two marines who are taking the class for advancement in their field, and me the novice, how to enter the canoe. Well, I didn’t think I was to plop down into it. “Just hold both sides of the boat with each hand, and lower yourself into the canoe.”

Now those instructions were backwards. They should have said, ”crouch all the way down to the pavement of the dock, and almost kneeling, grab both the sides of the boat, whilst praying that you don’t throw out your lower back, or worst, push the boat out, by mistake, and fall headfirst into the water.” With two athletic department instructors I managed to maneuver my tush into the seat, whilst holding on to either side of the boat, and not fall into the water. Actually, once I found my equilibrium, seated, it felt fine!

I was in the front of the canoe, and the instructor, who sat in the back, might have been holding back a fit of laughter from that activity, but I could not see him, and I dared not look back. Make that, I couldn’t look back, without my neck swiveling around like the kid in The Exorcist.

The sun was shining, the sky was blue, and the breeze as mellow as a summer’s day on Narragansett Beach in Rhode Island. All the other kiddies were rowing along, smiling, and soon, given the oar, was told to grab the top and row with the bottom; I, too, was rowing and humming and smiling. We paddled through a narrow passage. There were mangroves on the sides, overgrown, and crowding into the water. As we paddled along, it became necessary to duck the overhanging branches. I started to feel like I was an intruder in the House of the Mangroves. I was ducking under, pushing aside, and paddling away from the over-hanging branches. At one point, we had to row, with one hand, and lift a branch with the other.

Soon we came to the fun part. The first of two concrete bridges that were on the streets above. We were in the boats below. The first was the Fourth Street Bridge. Innocently, I asked if we were going under this bridge.

Everyone just giggled. I knew they were giggling, I could hear them. I felt like I was about to undergo an MRI, and not an open MRI. I thought … this was the claustrophobic nightmare that many people feared when having an MRI. But in we went, and I lay backwards, hoping that at one point, I would be able to sit up again without being airlifted to All Children’s Hospital and put in traction until the end of the semester. I wondered if they admitted older ladies to All Children’s. The mental image of me walking around with a full back brace for the rest of my life flashed though my brain.

The ride under the bridge was in reality about four minutes. It seemed like four hours. The next bridge was a higher one. I could sit up. I am five feet tall, but my head almost touched the bottom of the bridge, and I had that exhilarated feeling that I was at least five and half feet … a veritable giant!

As we paddled further, the branches of the mangroves completely blocked further passage, and we had to turn around. By this time, I could almost maneuver the turning around, and the paddling home seemed a relief, until we came to that obnoxious Fourth Street Bridge again, and I had to lean backwards. I underestimated my flexibility. Once again, I did it. We rowed up to the dock again. And the last obstacle surfaced as I tried to get out of the canoe. “Just hoist yourself up,” said the merry and limber 20 year old athletic department intern.

I looked her with a smile that said only one thing, ”are you kidding?”

She wasn’t. But I grabbed a hold of her skinny lithe arm, and almost pulled her into the boat like an old Van Johnson comedy, where the young lovers are having some “clean fun.” She was strong, however, and I managed to climb up on the deck, on all fours, and walk away from the dock.

I was feeling very snarky, sure of myself, and happy oh, so happy that I had gone canoeing, on this lovely sunny winters day, with the rest of my graduate class at USF, the nature writing class. It felt so good to be alive, and so much fun to be 73 … or, as I think of it … LIVING!