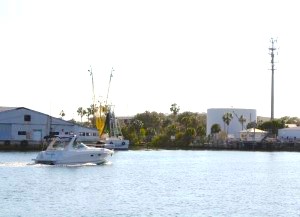 Most of us have a definite preference when it comes to water: either we feel the need to live in close proximity to a large body of water or the desire to remain completely land-locked.  Even then, there’s usually some wiggle-room: a preference for living miles from the ocean doesn’t mean one can’t enjoy swimming in a lake on a hot summer’s afternoon.

Either way, though, most of us realize and accept the necessity water, of a water-way free of pollutants, garbage and other detritus of modern life, even when that water-way is in the midst of a modern city.

Meandering through the southeast section of St. Petersburg, Florida is Salt Creek.  It is relatively short, as waterways go, and situated in a socioeconomically challenged part of St. Petersburg; both of these factors figure into why it is so frequently overlooked.  Once one learns of it and sees it up close, however, it is easy to see its beauty and feel peacefully invigorated by it.  One merely has to overlook the tires stuck in the muck, the six-pack holders tied up in the bushes, the beer cans shining from the bottom of the creek, and the colors swirling atop the water around the discarded can of motor oil.

The question for navigating Salt Creek was straight-forward enough.  Like most of our group, my Salt Creek partner and I opted for one of the canoes.  After easing into the small craft while trying not to overturn the boat, Doug and I paddled across Bayboro Harbor toward the entrance of the creek, passing small row boats and sail boats on up to a multi-storied city-on-the-water mansion of a boat.

The trip down Salt Creek gives an intimate picture of the waterway.  No doubt a once pristine creek, there are areas still bordering on wilderness.  But lest we forget that we’re traveling a creek in the midst of a bustling city, the wilderness is intermittent; most of the shoreline now holds marinas, restaurants, a multi-artist studio, warehouses, as well as a ridiculous amount of garbage.  There were beer cans and bottles, six-pack-rings, bags that once contained potato chips, cookies, candy, and the daily haul of groceries, as well as tires and other automotive parts; these were the more polite pieces of refuse seen in the water and hanging from lower tree branches and undergrowth.

On the Third Street Bridge—Thrill Hill, to those in the neighborhood—a man stood watching us with mild curiosity as we paddled toward him.  “Watch out for the sharks!” he admonished, a hint of smile in his voice.

But there were no sharks to watch out for that day, or most likely any other day. Rather, there was garbage to retrieve from the bottom of the creek or floating in the currents of the shallow waters or from the branches of nearby shrubs.  Occasionally, someone in our group would call out about a find either fished from the water or just out of reach: “Wow, look what we got!  Guess the fish are eating Corn Flakes now!”

“What else would you want to go with that beer?  Hey, that Styrofoam cup…can you reach it?”

“Hold on…got it!  Any chance we can pull that tire out of the muck?”

And on it went.  Most of us alternated between admiring the natural beauty and

bits of wilderness around us and wondering how anyone could be desecrate the water-way.

When we finally had to turn back—the high tide and low second bridge at Fourth Street South made going further difficult—I looked on the waterway with new eyes.  Here were the tires that could not be pulled out of the water; there was where the air stank with a rancid chemical stench.  But the wildlife surrounding us, both flora and fauna, seemed to be watching us as if requesting our help.

A month passes.  I wonder how close one can get to Salt Creek by car.  Grabbing my camera, I convince a friend to go for a drive.  We head south. 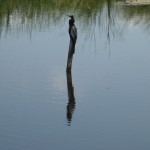 At the edge of Lake Maggiore, we find where the lake empties into Salt Creek just west of Ninth Street South at Twenty-Seventh Avenue South.  An anhinga watches us, spreads his wings to dry, then heads to the edge of the lake. I follow, take a few more pictures, then watch as the anhinga shows his dance steps across the water before taking flight.

On the way back to Ninth Street, we stop.  “Look,” points my friend.  I get out, walk to the creek’s shore and find myself face to face with a mid-sized alligator.  It might not be the shark our Third Street Bridge friend warned our group about, but I’m still impressed enough to snap several pictures of the six-footer.  He stays in the water, lazily watching me before swimming off. 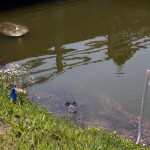 We follow the creek to the best of our ability.  In some spots, the streets run paral-lel to Salt Creek; in other places, it crosses the creek.  We are able to get a good feel for part of the waterway that our group couldn’t get to on the first canoe trip.  Egrets, anhingas, fish and gators were among the wild life observed along the way; unfortunately, we also spied the usual garbage suspects.

The final shots are taken from the Third Street Bridge of the back of Salt Creek Artworks on one side of the bridge. Crossing the street to the view the creek closer to Bayboro Harbor, I get a shot of a warehouse with Embree Marine Service painted on the side; across the creek from the metal building is an old wooden dock.  All of these—the dock, the marine service warehouse, the artworks—are as much part of Salt Creek as the egrets, anhingas, fish and alligators.  Unfortunately, the garbage, the flotsam of modern cities, was also part of the creek.  It shouldn’t be.

On the way back to Bayboro Harbor during that first canoe trip on Salt Creek, we approached the artworks’ building, backed up precariously above the shore.  A light pole extends over the creek from the corrugated metal building.  As we paddled closer, two large pelicans landed on the light pole, large sentinels with a request squawked in bird-speak; if we could understand them, we might have heard them plead, “Clean the creek, for us, for you, for the future.”

I hope we remember to do that…and more 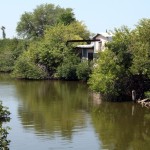