April 27, 2012 / Friends of Salt Creek / Comments Off on Voyeur or Voyager (Andy Fairbanks) 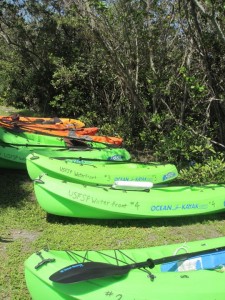 “. . . I mean that they [students] should notplay life, or study it merely, but earnestly live it from beginning to end.” (Heny David Thoreau,Walden)

Wednesday morning of spring break, the campus was mostly quiet as the sun emerged over the buildings to the east. An egret in mating plumage plucked minnows from the dock at USF St. Petersburg’s waterfront across from my reading perch at a table under broad oak boughs and blue sky. My quiet reflection on a recent sailing trip was occasionally interrupted by pleasant greetings with strangers and friends who occasionally passed by on the sidewalk and in the harbor below. Such a serene setting made it easy to shift my attention between the present and the recent past, in which I spent three days and two nights aboard Boogins II, a 34-foot sloop owned by the college that served as one of three floating classrooms for “Thoreau at Sea,” part of Professor Hallock’s Spring 2011 Nature Writing class.

Ospreys cried in the distance as the visiting co-ed sailing team (also on spring break from  Brown University, here to train in warmer climes) began rigging USF’s “Flying Juniors,” a fleet of uniform two-person racing sailboats. Supple bodies stretched and flexed before me as they hoisted multi-colored sails and launched the boats into Bayboro Harbor. Their coach looked amused as pelicans dive-bombed fish spooked by the noise. On the far side of the dock, a hodge-podge of cruisers that have been donated to USF over the years rested as silent witnesses to the scene now drenched in morning sun. Boogins II was among them, while another from our “Thoreau at Sea” trip,Wanderer, was out on another voyage. As the visiting sailors tacked towards the bay in a gentle breeze, I reflected on our adventures.

The Boogins II crew was comprised of aspiring literary scholars, mostly inexperienced at sailing but eager to learn. The six of us ranged from undergrads in their twenties, graduate students approaching middle age, and a senior auditor still spry in retirement. One among us literally crawled aboard with tears in her eyes, trembling with anxiety but determined to conquer her fear and embrace this unknown realm. Our captain assigned by the USF Waterfront Department, 26 years old but decades wiser in experience, was skilled and sympathetic. He was marginally interested in our studies and intent on making sure that all would have an exciting voyage. Indeed we did.

Aware that most of the crew was green (inexperienced, not sea-sick), our captain carefully explained what we were doing and how the boat would respond before hoisting and trimming sails or changing tacks. But it was a foregone conclusion that we would sail hard and fast, as the boat was meant to be sailed. Those who wished to do so helped trim the sails and steer the course, which occasionally meant wrestling againstBoogins II’s “weather helm,” or tendency to point into the wind in a strong gust. We were all salty smiles as our captain “buried the rail,” when the power of wind harnessed by our sails wetted one side of the hull and exposed the other, lengthening our waterline and increasing our speed.

On this trip we did not just study Thoreau’s Walden, we lived it. Most impressive, however, was our transformation from a bunch of individuals to a cohesive crew, truly classmates bound by shared adventure to each other, our campus and its vast annex of Tampa Bay made possible by these boats and able captains. In hindsight, what strikes me as unbelievable is that other students might complete a degree at USF St. Petersburg and never once explore the bay or their own souls in a similar way, yet the tools to do so are right there, just beyond the library.