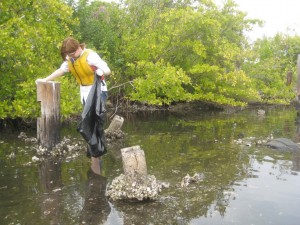 The trio of would-be musicians sat in the apartment, wrenching their brains on how to write the Salt Creek song. Two-thirds of the group had visited the creek, while the other third was mildly amused by the descriptions of the subject matter. The chord progression was worked out within the span of an hour . . . the lyrics took much longer to compose. Dark, humorous banter about the probability of a high corpse content within the rank waters of Salt Creek was replaced by arguments about how the hell to write anything remotely flattering about the river. At least the iambic pentameter and the rhyme scheme had been ironed out.

The primary problem that plagues Salt Creek is, simply put, that is an eyesore. As such, people neither wish to acknowledge its presence, nor care to grant it any redeeming qualities. Aesthetics, unfortunately, is responsible for the level of importance that society offers a given thing. For example, the Humane Society runs a commercial spot on basic cable. The commercial  consists of a series of video snippets set to some sad music (usually Sarah Mclachlan or Tom Waits). In these snippets, a variety of animals look forlornly at the camera from the confines of their cages, ostensibly begging for the viewers to adopt them. What is interesting about the commercials is the ratio of cute to ugly animals, which is about 1 to 5. In other words, for every 5 fluffy puppies or kittens, there is a shot of a cat missing an ear, or a three-legged, mangy, wall-eyed dog. The insertion of these disfigured animals is to remind viewers of the cruelties of animal abuse. Salt Creek is that battered, wall-eyed puppy that serves a didactic purpose, but is rarely adopted.

While the aforementioned analogy may seem wildly inept to some, one cannot deny that the creek is extremely marginalized. The appearance of Salt Creek is proof enough that the only attention that has been paid to this stretch of water is the same attention that one might pay to a drainage ditch. An overabundance of litter of all descriptions is strewn about the banks. The mangroves are fairly filled with the leavings of people who have used the watershed as their personal dumping grounds.

The garbage itself is a sign of how non-important Salt Creek is. To hearken back to the song lyrics, one of the verses reads: “Men still cast lines from the bridge above, though sometimes their haul is a boot or a glove.” Apart from the inside joke that arose during the class’s initial visit to the creek for cleanup purposes, there is a bit of romanticism to those lines. An old boot or a glove would probably be among the higher quality pieces of refuse fished from Salt Creek. An old television set, a discarded outboard engine, or even one of the aforementioned corpses would have been nearly preferable to find during the cleanup as opposed to the plastic bags, drink cups, beer bottles, and used condoms that were present. Salt Creek apparently doesn’t even rate high enough on the litter scale to harbor decent trash.

The pastoral view of nature produces a cataract in the eye of the beholder: the dismissal of the utilitarian. To live near farmlands and reap the scenic benefits provides a completely different perspective from those who have to live off of those lands. Thus, it becomes rather laughable to adhere to an ideal that one has no practical relationship to. When one drives through a rural area and sees cattle grazing in rolling, emerald fields, that person appreciates the passing beauty of the scene. Conversely, when one is inthat field of cattle, boots stained with shit, bloody and sweating from repairing a barbed wire fence, the admiration becomes rather strained. Thus, the appreciation of the laborer, when it does arise, becomes a genuine love for the land.

Paradoxically, the decidedly un-Romantic view that visitors have for Salt Creek is probably not shared by those who experience the watershed on a utilitarian basis. The fishermen from the song most likely harbor an affection for the creek as they spend afternoons casting lines and watching would-be ecologists clumsily navigate up the waters. Perhaps those two laughing souls who warned the class of alligators should spearhead the movement to save Salt Creek. Their message would probably ring truer.

So, how to move beyond obvious, clichéd “Let’s find something and think Green about it” movement, so pervasive in today’s media. The amount of time I’ve spent racking my poor, spent brain on how to defuse my apparent distaste for the creek is offset by the actual mission of the project. Without further discourse, the mission, as I perceive it, is this: “we can endeavor to change the face of Salt Creek forever.” Yes, I realize that it’s a cheese-filled allusion to that song that the trio from the beginning of the paper produced, but the answer is hidden in a single word: face. The mission of the project is to change community perception. The dam that chokes the waters will, most likely, never be demolished. The garbage will continue to pile up. The stench will continue to offend the nostrils. These negative elements, however, will slowly reverse themselves if the citizens ofSaint Petersburg actually get to know the creek like those fishermen. A change in perception will necessarily lead to a change in reality. Once can only hope that someone will eventually genuinely love the wall-eyed puppy ofSaint Petersburg.